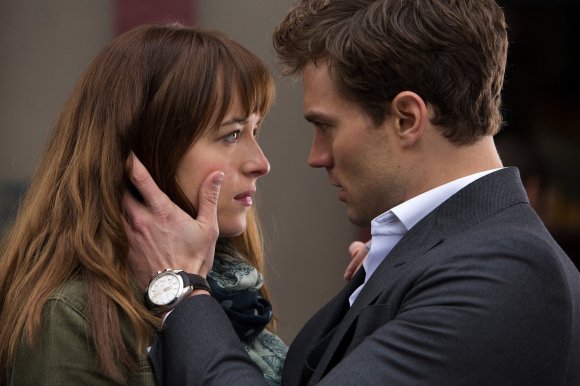 I don’t buy books unless I’m sure. They generally have to pass a test – would I want to pass them on to my future generation? If not, I take them out at the library. Of course, the popularity of Fifty Shades Of Grey ensured that it was not available in my library for months and I was too curious to wait, so I picked up the trilogy from a book store and got stuck in.

Most readers would say it wasn’t written for literary merit, it was written for enjoyment, and that’s evident in its blatant tribute to Twilight and the constant use of ‘mercurial’ and ‘inner goddess’. But it was Christian Grey’s control issues that I couldn’t get my head around.

So I went to see the movie to understand its universal appeal in a world where feminists are on the rise.

Anastasia Steele is more likable in the film, thanks to Dakota Johnson. There are times in the movie where her humour makes her a hero, not the single-faceted naive girl she is in the book. Funny moments come when she drunk calls Christian and when she calls him a ‘serial killer’ in jest when he randomly shows up at her workplace. Because, yes! He has got creepy tendencies – being attractive and rich can’t hide that, no matter how much denial author E.L James was in as she wrote the book. The injection of humour throughout saved it for me, because how seriously can you take a movie where the leading man has to somberly say that he’s ‘fifty shades of fucked up’?

I expected to be snorting with laughter and rolling my eyes throughout the film, but actually I enjoyed it more than I thought, despite my discomfort of the main characters dysfunctional relationship. The sex scenes weren’t all so cringey all the time and there were heartfelt moments, like when Ana and Christian go gliding.

But I can’t put the fact that the film is about a man wanting to control a woman behind me. Recently various ads from the 20th century were revealed for how sexist they were, and today’s society were shocked, angry, and happy that those days were behind us.

Considering Christian spanks Ana for rolling her eyes at him, what does this outdated advert remind you of?

As women, many of us would say that if a man who YOU JUST MET tracks your phone and turns up wherever you are with no invite or warning and sternly tells you to eat that they’re not a mentally healthy person. It would be alarming and annoying; it’s something I’d tell my girlfriends about whilst simultaneously blocking him on WhatsApp and laughing anxiously. Christian’s jawline and bank balance doesn’t validate his behaviour, despite the global consensus.

We’re meant to be progressing. But are we just progressing to a time where we’re made to believe that what (some) men want is now a choice we’ve made ourselves? It wasn’t as if Ana enjoyed being a submissive and entered this relationship to empower her own fantasies – she, a virgin, was plied with alcohol by an intimidating figure and was then eased into it, groomed you could say, and eventually found it enjoyable after some tears and confusion. This is the highest selling movie of the year. And whilst I do understand the enjoyable elements, something doesn’t sit right with that.